In the introduction to Well-Read Black Girl: Finding Our Stories, Discovering Ourselves (Penguin Random House 2018), editor Gloria Edim explains, “Reading highlights the intersection of narrative and self-image to create compelling explorations of identity.” Edim tests this theory by asking twenty-one black women writers when they first saw themselves in literature. Much like the women themselves—including writers Dhonielle Clayton, Rebecca Walker, and Zinzi Clemmons—their responses in the form of essays were multiplicitous.

Tayari Jones, the best-selling author of An American Marriage, wrote in her contribution to the anthology about how, while growing up in Atlanta, she saw an abundance of black images in which she could identify. Her essay explores her use of books as a mirror to understanding life as a black woman, referencing Toni Morrison’s Tar Baby as an example. As a college student reading the novel for the first time, Jones didn’t understand the protagonist’s choice to reject the advances of “an extremely fine black man.” Nodding to Nikki Giovanni, the most prominent poet of the Black Arts Movement, she believed firmly in the idea that “black love is black wealth.” Who could the protagonist be, who could Jones be, without the idea of black love?

Fast forward a few years when Jones taught the novel to her own students and she finally understood that Morrison was teaching about the possibility of self-love.

Still, Jones was lucky. She found herself within the pages of books early on, and from those stories, she cultivated her self-image and shaped her identity. WRBG reminds me of how different my experience was. Like Jones, I grew up in a city with a majority black and brown population, but as a fair-skinned black girl, I didn’t feel like I fit in. I wasn’t black enough because I couldn’t dance, didn’t talk in slang, and wasn’t rambunctious. My hazel eyes, narrow nose, and honey-colored hair set me further apart. And, I didn’t fit in with the Puerto Rican girls either because I didn’t speak Spanish.

Of course, I know now that my ignorant, teenage self believed the false narratives about blackness being a monolith. Yet, back then, I wasn’t shown otherwise. My mother, who is also light-skinned, never had conversations with me about identity; she assumed I would figure it out on my own. If only I had discovered my love for reading earlier—my identity would be firmly rooted in the trees my ancestors planted. Instead, it took 14 years before I discovered Toi Derricotte’s The Black Notebooks and learned that my early confusion and ambivalence about my black identity wasn’t unusual.

Overall, I felt an overwhelming sense of pride as I discovered pieces of myself that I’d been longing for through the words of the writers in the anthology. For example, Harlem-based writer Morgan Jerkins’ explanation of her reception to Claudia Rankine’s Citizen reminded me of my own response. During an interview with Rankine, Jerkins asked how she prepares to walk out into a world where black lives are tenuous. Rankine said she doesn’t have to prepare to go out into the world; rather, the world interrupts her. This new understanding was a transformational moment for Jerkins, and for me. We are both trying to figure out how to live in a country that was built by us, but not for us. Rankine’s words were a reminder that, as black people, we have to create joyful existences despite those interruptions.

The reflections about self-exploration, identity, and love are the threads holding this anthology together, but there is something else too. Edim and the other writers are conscious of the myths that we carry as a society and hold as black women. These myths date back to the beginning of American history.

In 1740, literate slaves in South Carolina discovered a Spanish edict, published in 1733, which freed slaves who migrated to St. Augustine. The slaves organized, forming a band that looted a firearms store and killed twenty colonizers along the way. They were quickly disarmed, killed, or recaptured. After what became known as the Stono Rebellion, colonizers saw the perceived danger that literate slaves posed, and enacted anti-literacy laws across the colonies. Slave accounts described violent punishments for being caught reading and writing. The first infraction resulted in lashings; the second and third often resulted in branding or dismembering. In 1831, after the Nat Turner Rebellion, Virginia strengthened its prohibitions on slave literacy by imposing the death penalty.

Throughout history, white colonizers purported the black slaves were subhuman partially due to their inability to read, while also failing to acknowledge that illiteracy was not a choice.

In the context of the history of forced illiteracy, the Well-Read Black Girl anthology is another kind of rebellion. The poets, essayists, playwrights, and novelists who helped create the collection are rebelling against myths that purport lies about black personhood, especially black womanhood. Whether we’re writing about the 1700s or the 2010s, these myths didn’t dissolve; they just evolved.

The Oxford English Dictionary defines canon (as in the American or Western literary canon) as “a standard of judgement or authority; a test, criterion, means of discrimination.” After a simple Google search of “American literary canon,” I found a list of “the best novels” published by The American Scholar in 2014. The author compiled one hundred titles published between 1792 and 1985. Less than half of one percent included titles from black authors.

No, a definitive list of books in the literary canon doesn’t exist. Yet, when we talk about the canon and look to the most widely studied books in schools, black authors are rarely in the forefront of our conversations. Scholars did engage in the “canon wars” in the eighties, which resulted in the inclusion of more women and people of color. But that didn’t end the debate and, in some cases, only strengthened the assault against multiculturalism. The Western Literary Canon is essentially a test that black writers have failed—a criterion that calls black people unfit, and a means of discrimination that promulgates false narratives in the black psyche. This is to say, the lies of the literary canon are no different from the lies of seventeenth century racism.

Last year, a student in my MFA program presented a craft lecture where she discussed the absence of black literature in America’s literary canon and why inclusion is important for deepening our understanding of black experiences. Most of the audience nodded in agreement. Yet, one of our white, male mentors cut into the conversation. He thought it was important to acknowledge that when he attended the University of California at Berkeley twenty years ago, he read James Baldwin. (He should have prefaced his remark with the fact that today Berkeley’s Diversity Data Dashboard reports only three percent of its undergraduate population is black.) I sat there in disbelief and witnessed other black students doing the same, stopping themselves from verbally assaulting this mentor about his privilege.

The mentor insinuated that the absence of black literature isn’t a widespread problem in the United States because at Berkeley, white students read Baldwin. He didn’t consider the many black and brown youths who don’t know who James Baldwin is. I didn’t. I only knew about writers such as James Fenimore Cooper, Nathaniel Hawthorne, F. Scott Fitzgerald, and Herman Melville. I didn’t discover Baldwin or even read a black author until graduate school. Many of my peers had similar experiences. What the mentor implied is that he doesn’t understand the importance for black people to see themselves reflected in literature.

To that, I suggest he reads Well-Read Black Girl.

The literary canon is a reinvention of anti-literacy laws, which in most cases guarantee that black children, like I once was, will not see themselves in literature until, maybe, college—if they are lucky. In her essay, “Why I Keep Coming Back to Jamaica,” Veronica Chambers wrote that Jamaica Kincaid taught her that simple words were like “torpedoes.” The writing in this collection isn’t simple, but it certainly strikes down all the myths we carry about black personhood. 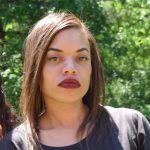 SUSETTE BROOKS is a writer and a descendant of Paterson, New Jersey’s literary history, which includes being home to the young Allen Ginsberg and the inspiration for the William Carlos Williams epic poem, Paterson. She is a wearer of many hats. She’s an MFA candidate in Goucher College’s Nonfiction program where she’s writing a memoir in essays about black identity, grief, and trauma. She is the former nonfiction editor at Philadelphia Stories and currently serves on the magazine’s editorial board. She teaches composition at a community college in Baltimore. She is also a public affairs officer in the New Jersey Army National Guard. Susette lives in Brooklyn with her tabby, Louie, who makes all the household decisions.