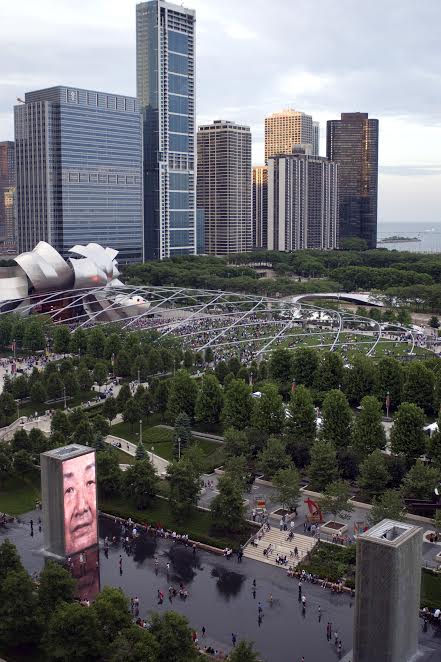 Like any great and beautiful beast, a city lives as an organism full of living organisms. A city thrives when the organisms within it thrive. This thriving survives on a chosen and thoughtful geographic density, one that balances planning with serendipity.

Adjacency. Nearness. Propinquity. The kinship that comes from existing in a crowded place where at times interpersonal privacy wins the prize (alone in a crowd, you ignore me companionably and I ignore you back) and at times chance interaction is desired (I bump into you and we laugh, we chat, I give you directions).

Crown Fountain in downtown Chicago lives and thrives by facilitating a watery living and thriving.

Designed by the Spanish artist Jaume Plensa, Crown Fountain looms benevolently at 201 E. Randolph Street between Michigan and Columbus Avenues, its two 50-foot steel and glass-block towers sentried at either end of a shallow reflecting pool. Water, that universal compriser of life, spouts from the mouths not of gargoyles, as it might on a traditional fountain, but rather out of the LED-screen-projected lips of an array of Chicago citizens. From mid-spring to mid-fall, the water spits from their glowing and pointedly diverse faces, taken from a cross-section of one thousand actual city residents. And even when the water stops flowing, the faces still gleam.

The structure is named in honor of its sponsor, Lester Crown, a businessman, philanthropist, and heir to a vast Chicago fortune. But the name also seems apt because Crown Fountain—along with Anish Kapoor’s Cloud Gate, aka the Bean—truly shines as the crown jewel of Chicago’s splendid collection of public art.

On warm days, the black granite pool teems with little kids and their parents, and adults of all ages, both residents and tourists. Even the visitors who decline to step in and splash and be splashed line the perimeter to take in and become part of the scene, clusters of people composing and recomposing themselves like a living painting.

The fountain serves as an example of “dualism,” which means something specific architecturally: co-eternal binary opposition. Though the fountain-towers seem less opposed and more complementary, suggesting protection and synthesis, standing like non-military fortifications to provide watch over an irresistible and inviting open-air street scene. One of Plensa’s principles in Crown Fountain’s creation was universal design: offering easy accessibility to all who want access.

As for me, winter or summer, whenever I visit, I admire Crown Fountain’s dualism in the sense of the simultaneity it affords those who choose to go there: watcher and watched, performer and audience, a nobody and a star all at the same time. A paradoxical and pleasing way of being. A kind of pedestrian magic.

“Writer as Urban Walker” is the title of a class that I teach at DePaul University in Crown Fountain’s city: Chicago, Illinois. Often, on the first day, when my students and I break the ice between us and share why we’d find ourselves in a class about strolling around an urban environment, many of them say that it’s because they are people watchers; they love watching people. And then many of them, after they admit to this affinity, add self-consciously that they know this makes them “creepy.” But it doesn’t; actually, it makes them human. What is far creepier is not watching people, either through sheer incuriosity or distraction, e.g. fear of difference, smartphone zombiehood, screen staring, etc.

Better to stare first at Crown Fountain’s screens, its uncountable diodes emitting light, and then to stare at the other people staring and playing, and then maybe to talk to them or not.

The American urbanist William Whyte (1917-1999) was sort of a professional people watcher, and he would have found much to see at Crown Fountain. People want to be close to the action and there, they are—both close to it and part of it.

With his brilliant film, The Social Life of Small Urban Spaces, put out by the Municipal Art Society of New York in 1980, Whyte offers a documentary that, by applying anthropological techniques to the study of people’s behavior in cities, tests assorted hypotheses. Whyte tries especially to figure out the reasons for under-use of public plazas. Unsurprisingly, he finds that people do not like dreary, empty places. So what makes the good ones work? he wonders.

The answer has to do with a series of basic factors applied in balanced combination. He summarizes these at the 42:38-minute mark, stark on the screen in black and white:

The first six are relatively self-explanatory, and–given its location at the intersection of several busy streets and the verdant Millennium Park with plenty of benches and exposure to the sky and food options—Crown Fountain has those half-dozen traits in abundance. The seventh, triangulation, Whyte defines as “that characteristic of a public space that can bring people together—strangers. It’s usually an external stimulus of some kind” which signals “something is going on and people are beginning to talk about it.”

This feature, Whyte explains, can be a performer or an object of art. Crown Fountain is both. People can talk and even argue about it, letting it serve as a conversation piece. And the interactivity of Crown Fountain works so well to triangulate because it fulfills Whyte’s eighth point skillfully as well: it is scaled appropriately to what’s around it, which lets it gently unify people and bring them together.

Its year-round versatility and vitality impress me, definitely, but Crown Fountain captivates me most when its water is on. Whyte articulates his stance on fountains unequivocally: “Water ought to be used,” and its best use occurs when people can “splash about” with nobody to stop them. At Crown Fountain, splashing not only is not stopped, but actively promoted.

In this way, Crown Fountain is an unassuming engine in the heart of the Loop. Its activity attracts activity, and thereby it becomes a perpetual motion machine, a self-sustaining scene that carries itself appealingly on and on. Crown Fountain presents a low-key festival every day, comforting in its relative dependable sameness, but delightful in its constant change. You know that every few moments, the faces on the towers will close their eyes, purse their lips, and pour water 12 feet down. But it gets you—literally and/or figuratively, depending where you’re standing or sitting—every time.

Crown Fountain understands that people do not want their public plazas or shared art to be escapes from the city. They want them super-saturated with the pleasures of street life. Smiles and interactions. People watching, essentially.

And in that regard, Crown Fountain provides street theater of superlative beauty in which the membrane between spectator and spectacle is as liquid and permeable as one could desire it to be. An organic show that never closes, the happiness that arises in human movement. 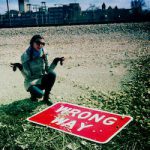 A founding editor of Rose Metal Press and a founding member of Poems While You Wait, KATHLEEN ROONEY is the co-editor with Eric Plattner of Rene Magritte: Selected Writings (University of Minnesota Press, 2016). The author of eight books of poetry, fiction, and nonfiction, her second novel, Lillian Boxfish Takes a Walk, is forthcoming from St. Martin’s Press in January 2017. She lives in Chicago with her spouse, the writer Martin Seay. (@kathleenmrooney)