In “Unclenching the Fist,” rhetorician Richard Marback argues that objects are like words: “They provoke response. They are experienced. They are all right there, flowing into each other . . . there are some objects that so provoke us, so persist in their singularity, inviting more and varied embodied responses, that they become controversial, exemplary, or puzzling.”

Objects, Marback argues, have a life of their own, beyond our mundane uses for them; they affect us in their own ways. We often don’t examine the objects we interact with beyond their usefulness, and most exist outside of our conscious awareness altogether. But maybe it’s time to give objects their due, from the pillows we sleep on to the foods we consume to the structures that make up our cities. Two podcasts—Everything is Alive and Wonderful!—focus on the ways that objects affect us, inspiring introspection or enthusiasm.

Everything is Alive, a new podcast in the Radiotopia network, invites the listener into the world of anthropomorphized objects. Each week, host Ian Chillag interviews an inanimate object, voiced by various comedians. I was initially skeptical of the podcast’s premise, thinking it could easily become overwrought or cliché. I even wondered if I might be missing an elaborate satirical ploy to get the New Yorker-reading, NPR-listening crowd to enthusiastically praise a podcast with such an absurd concept, only for Chillag to later reveal it to be performance art, like a host who serves Chicken McNuggets to a fine-dining crowd and receives rave reviews.

However, Everything is Alive is in good hands. I expected twee, overwrought interviews with painfully obvious connections—for instance, using a bar of soap to talk about the things and people we traditionally label “dirty” or a can of soda to decry sugar consumption. What I heard was a surprisingly nuanced podcast, at once charming and poignant, never jumping to trite life lessons but instead focusing on objects’ imagined interior lives.

Chillag’s interviews include Louis, a morose can of cola; Maeve, a neurotic, yearning lamp post; Ayo, a wistful balloon; and Tara, a tough-talking, sarcastic bar of soap. Most of the objects are human-made. All have their own interior lives and distinct personalities, brought to life delightfully by the actors anthropomorphizing them. These personalities drive each unscripted interview, making each episode distinct: some end with me groaning at puns (after describing people singing in the shower, Tara’s episode ends with a wry “So it’s a soap opera”), whereas others surprise me with their profundity (after discussing death and dissolution, Chillag offers to drink Louis and questions him about his experience being consumed).

Interspersed with the interviews are small snippets of research or phone calls conducted by Chillag that add texture to the episodes and invite introspection through juxtaposition. After interviewing the brusque bar of soap about what she smells like—to which she retorts, “How would you describe what you smell like?”—Chillag interviews Saskia Wilson-Brown, the founder and director of the Institute for Art and Olfaction, a nonprofit in Los Angeles. He asks her, “What ingredients would you use to make the smell of a person?” Though Wilson-Brown notes that humans share animalic chemical components, she says that the the question is too difficult to answer, because each human has a unique scent composition. Directly after that interview, Chillag returns to interviewing Tara, the worn-down bar of soap, who talks about the legacy she’d like to leave as she disintegrates in the shower.

In such moments, Everything is Alive knits together its interview and researched components with a light, deft hand. Explicitly and implicitly, the podcast asks, What does it mean to have a soul, and what comprises it? What legacy do you want to leave? What makes us different from another person, or another object? Everything is Alive asks us to find the meaningful in the mundane. Our products are mass-produced and appear identical—from a bar of soap to a balloon to a soda can—but the episodes suggest that by coming into contact with people, they become as unique as we are.

If Everything is Alive is a slightly absurdist yet thought-provoking series of interviews with everyday objects, Wonderful! is an enthusiast podcast with one mission: find pleasure in the everyday. Hosted by husband-and-wife duo Griffin and Rachel McElroy, Wonderful! catalogues weekly “small wonders”—insignificant yet delightful items like a new accordion or Ibuprofen—as well as “big wonders”—extended, researched discussions of books, food, objects, musicians, ephemeral qualities, and other miscellany.

Every episode is saturated with warmth, born of the hosts’ affable chemistry: they improvise jokes and songs, giggle at each other, and share how big wonders help them cope with the challenges of raising an infant son. Listening to it feels like sitting down in a coffee shop with two relentlessly optimistic and friends, the kind who read you poems and can sustain hour-long conversations on the joys of pumpernickel bread or washing machines.

When the McElroys choose objects as a wonder, they invite listeners to think about the ways that objects intersect with and augment our lives. Eyeglasses are an efficient way to enhance or correct one’s vision; washing machines make life with a messy toddler bearable; a light jacket keeps one cozy but not overheated; pumpernickel bread is fun to say, has an incredible apocryphal etymology, and tastes lovely. (Soon after listening to the episode in which the latter was mentioned, I walked to my local bagel shop and savored a pumpernickel sandwich.) For the hosts, objects are more than just utilitarian; they can carry memory and emotion.

In episode 15, for instance, Griffin’s enthusiastic appreciation of a sharp kitchen knife meanders from his experience learning how to use knives while during a high school cooking elective to his suffering a “sweet-potato-based injury” with a dull knife to the satisfaction he derives from watching YouTube channels of super-sharp knives cutting through various items. Or take episode 48, when the hosts discuss the video game Johann Sebastian Joust in which players sword-fight to the fluctuating tempos of Bach’s Brandenburg Concertos. It focuses on the ways that play brings us together and inspires innovation, as the hosts recount funny stories of playing with family and different spins on the game.

While both Everything is Alive and Wonderful! help us appreciate the quotidian, they couldn’t be more tonally different: Chillag and his interviewees speak in bemused, soporific voices that sometimes verge on parody, while the McElroys’ show is more upbeat, opening with a jazzy saxophone riff and suffusing improvised ditties and laughter throughout.

An Everything is Alive podcast may begin with a playful introduction of an object, then riff on philosophical questions like “What does it mean to be alive?” “What legacy do we leave behind?” and “What effect do we have on objects, or objects on us?”, before ending with a reference to death or dissolution. By contrast, Wonderful! seems less concerned with the existential and more interested in the pursuit of delight. The hosts praise the utility of everyday objects in fulfilling their purposes but they never anthropomorphize objects or think about their end. Unlike Everything is Alive, Wonderful! doesn’t have to imagine secret inner lives of their chosen wonders: by virtue of having hidden histories, they are fascinating enough on their own.

Everything is Alive and Wonderful! ask us to become more attuned to, and appreciative of, the things that make up our lives. After listening to these podcasts, I find myself imagining the secret lives of my books, my bathroom items, my kitchen implements. I now keep a running list in my journal of small wonders: a pine-scented air freshener to keep out the smell of mildew damage in my car, a grinder to bring out the oils in freshly-ground coffee beans, a new single by Lizzo, a particularly thick pair of socks to keep away the winter chill.

Although appreciating objects could lead to elitist consumerism (“My Le Creuset pans and mid-century modern chaise and iPhone XS are wonderful!”), one doesn’t have to own fine objects to appreciate them. Attunement to objects can simply mean augmenting one’s life through material items. For instance, I can appreciate freshly-laundered Hanes T-shirts or the feeling of perfectly peeling a clove of garlic in one try. I can appreciate how Irish Spring soap and Tide pods mix with human pheromones to create the scent of the person I love. I can appreciate the way a hundred-year-old house has held dozens of families, traditions, and stories, some of which are my own. If these podcasts impart anything to their listeners, it’s that attuning yourself to the mundane and the insignificant can make life bearable—even wonderful. 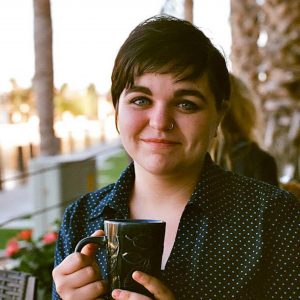 PAISLEY GREEN is a writer, editor, and teacher living in Portland, OR. Her current and past projects are eclectic, including managing social media for Random Sample Review; curating a chapbook to accompany an art exhibit on microbiomes; and co-creating a traveling educational exhibit about the Holocaust in Bedzin, Poland that travels around the US.